Venta del Barón, an extraordinay Extra Virgin olive oil from Spain, remarkable for its intense fruity green olive with herbaceous notes, peppermint, almond shells, banana and apple. With a keepsake of vegetables such as tomatoes and artichoke. 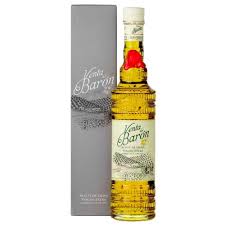 The entrance is sweet, with a bitter and spicy in light progression. The aftertaste is nutty.

Very complex, balanced and harmonious in all its attributes olfactory, gustatory.An olive oil that give a special touch to any dish that requires a touch of olive oil.

This olive oil comes from the Sierra de Priego, where seasonal pick them ahead of their fall. Hojiblanca variety and Picuda are transported in special boxes so that the weight of the olives not damage the fruit.
Designation of Origin Priego de Cordoba, has an area of 30,000 hectares growing only very old olive trees, built partly in the Natural Park Subbetica.

These features give the olive oils its own unique microclimate of the area, resulting in the production of high quality oils, with a exclusive character, worthy of international recognition as in the case of Venta del Baron.